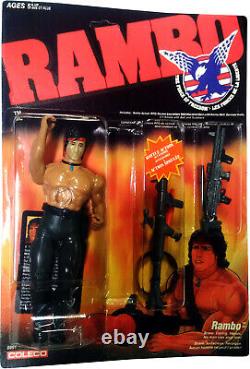 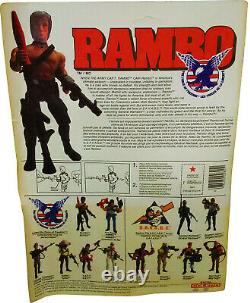 Win multiple auctions & we will combine items. Mint on Sealed Card - MOSC!! - item is factory sealed on original card. Heroic No Man Can Stop Him!

When the Army can't, Rambo can! Rambo is America's ultimate weapon - unequaled in courage, unfailing in patriotism, he is a man who knows no defeat. His strength and skill allow him to accomplish dangerous missions that no ordinary man would attempt. Martial arts, weapons, explosives - Rambo is a master of all!

He fights for America, but most of all, for Justice. Rambo leads a select force of trained experts who risk their lives for Freedom's cause.

With Rambo, they fight and age old battle against evil. But evil wears many faces, and none is more sinister than the face of S. This world-wide terrorist group is lead by the scheming General Warhawk, a man motivated by greed and the thirst for power.

As he lays his plans for world dominance, only one man stands in his way - Rambo! Package Type: Retail Carded with Plastic View Window. Condition: Retail Card in Mint Condition!

This Rambo The Force of Freedom - Rambo Figure is NEW!! In its' Original Factory Sealed Card. The card has some warping.

This card is New and Unpunched. The colors are vibrant and unfaded! Actual item shown in picture. It Has Never Been Opened. This card is case fresh! Rambo Action Figure, Battle-Action RPG Rocket Launcher, M60 Machine Gun wit Ammo Belt, Survival Knife, 2 T-Knives with Belt and Scabbard and Official I.

No man can stop him! Place RPG Rocket Launcher under right arm of figure and place handle in figure's hand (put brace against chest). Pull back string until ball snaps out of fingers (rocket will launch). General Warhawk, Sergeant Havoc, Black Dragon, Nomad, Gripper, and Mad Dog. Collect the Force of Freedom!

Color and decorations may vary. Desire for this Rare Collectible!

The item "RAMBO, The Force of Freedom, Vintage 1985/86 Rambo Figure, Mint on Sealed Card" is in sale since Tuesday, April 23, 2019. This item is in the category "Toys & Hobbies\Action Figures & Accessories\Action Figures". The seller is "telecommandercorp" and is located in Niagara Falls, New York.