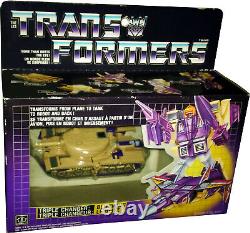 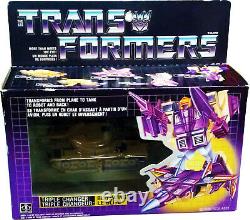 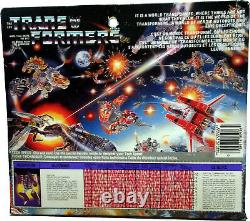 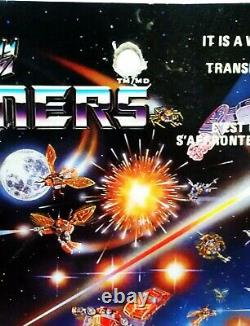 The ability as Triple Changer to rapidly transform makes him one of the most dangerous Decepticons. Cruel sense of humor, loud-mouthed, belligerent and brash.

Flies at mock 2.7, range 2700 km and has heat-seeking concussion missiles as jet. As tank has track-mounted cannon that fires explosive shells 5 km.

As robot has electron-scimitar and gyro-blaster rifle. Often gets stuck in mid transformation. It is a World Transformed, where things are not what they seem. It is a world of the Transformers... A world of heroic Autobots and evil Decepticons!

Transformers - More than meets the eye! Transformers from Plane to Tank to Robot and back! Packaging: Transformers Triple Changer - Blitzwing - Vintage G1 1985 - Collectible. Is in it's Original Factory Retail Box. Actual item shown in picture.

It Has Never Been Opened. Condition : Retail Boxed in Near Mint Condition.

There is a hole in the header flap where it was hung for display but there is no flap crease. See all pictures for condition.

The Original tape seals both sides. The colors are vibrant and unfaded! This is NOT a reissue - this is an authentic sealed vintage item from 1985! Imported By: Hasbro Canada Inc.

Country of Manufacture: Made and printed in Japan. Tech Specs: Clip and save! Use the decoder inside to decipher your Tech Specs!

The item "Transformers Triple Changer Blitzwing Vintage G1 1985 Near MISB AFA IT" is in sale since Tuesday, April 9, 2019. This item is in the category "Toys & Hobbies\Action Figures & Accessories\Action Figures". The seller is "telecommandercorp" and is located in Niagara Falls, New York. This item can be shipped worldwide.